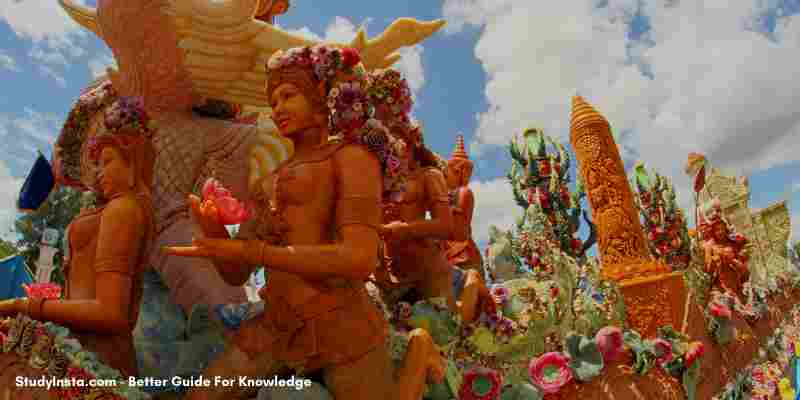 Festivals of India Essay: A festival is a kind of celebration. Festivals are many and varied in nature. Different festivals are observed in different tribes and communities. In India, we find Hindus, Muslims, and Christians, and Hindus from the bulk of the Indian population. These religious groups observe their respective festivals in their traditional ways. They are as follows:

Puja festival: Pooja festival is the festival of Maa Durga. It is a Hindu festival. It falls in the month of October every year. This festival lasts for ten days. On the tenth day, images of Durga are taken in procession and immersed in a river or reservoir. The festival is grandly held in the cities of Calcutta and Cuttack.

Diwali: It is more common as the ‘Festival of Lights’ and is celebrated by all Hindu sects across the country and abroad. It falls on the auspicious day of the new moon’ of Amavasya in the month of Karthik that usually falls in October or November, But the exact date varies from year to year. After slaying the demon king Ravana, Diwali celebrates Rama’s house. On the evening of this day, earthen lamps are lit in front of every house. People burst play-bombs and firecrackers and play with lots of fireworks.

Car-festival: Hindus celebrate a lot of festivals in a year. The car-festival is the largest of them. This festival usually falls in the month of July. But the exact date varies from year to year. The most important is the car festival in Puri. The three deities of the Puri temple, namely Jagannath, Balabhadra, and Subhadra are placed on three chariots made of wood. These chariots are large in size. Powerful wires are attached to them. When the pilgrims pull the strings, these chariots move. The car festival is held at many places in Odisha. But the car festival in Puri is the largest car festival for Hindus. Every Hindu in any part of the world wishes to see it at least once in his lifetime.

Festivals are a source of joy, excitement, and enjoyment to the people of India. Life will be monotonous without them. People are awfully busy nowadays. Festivals provide them great pleasure.

Odia Essay – Odia Essays For Students in the Oriya Language

Food Problem in India Essay for Students and Children