Kartik Purnima or Kartika Purnima is a religious festival, celebrated on the full moon day or Purnima. It is also called Tripuri & Tripurari Purnima 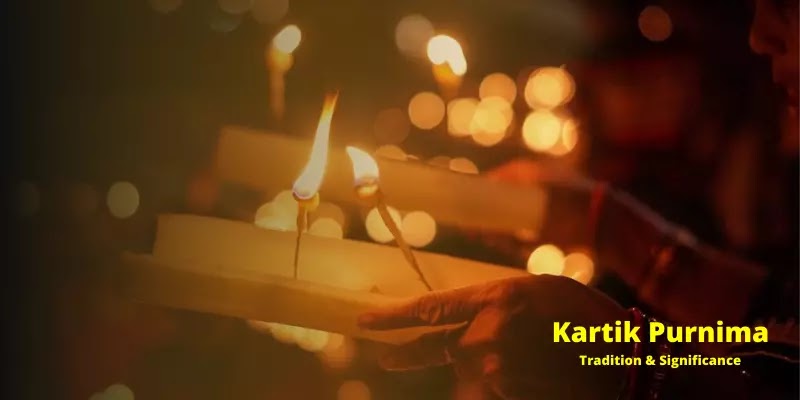 Kartik Purnima or Kartika Purnima is a religious festival, celebrated on the full moon day or Purnima. It is also called Tripuri Purnima and Tripurari Purnima. It is also known as Deva-Diwali or Deva-Deepawali, the festival of lights of gods. Apart from the Hindu, this day holds equal importance for Sikhs and Jains. People worship Lord Vishnu and Goddess Lakshmi on this auspicious occasion. The month "Kartik" is considered the holiest month among all lunar months.

The significance of Kartik Purnima (Kartika Purnima) is filled with legends and the main purpose of celebrating this festival is to conquer good over evil. The only difference is the way of presentation and characters.

1. Tripuri or Tripurari purnima derives its name from Tripurari- the enemy of the demon Tripurasura. Tripurari is an identification of God Shiva. According to the historical legend, it is believed that Lord Shiva killed Tripurasura, a son among the Three demon sons of Tarakasura.

Lord Shiva in his form as Tripurantaka killed Tripurasura on this day. Tripurasura had defeated the whole world and overpowered the gods and also created Tripura, three cities in space. The killing of the demon by Lord Shiva overjoyed the gods and they celebrated this day as the festival of illuminations. This day is also known as Dev-Diwali, the Diwali of gods.

This day is also observed especially for Goddess Radha, the lover and eternal partner of God Krishna. It is accepted that Krishna and Radha danced rasa and Krishna worshipped Radha on this day. This day is also dedicated to the dead ancestors.

3. It is also believed that the origins of this festival may lie in ancient times when a sacrifice called Ashvamedha was performed to achieve victory over enemies.

4. The festival has even more important when the day falls in the Krittika Nakshatra (lunar mansion) and is then called "Maha Kartik". When the nakshatra is "Bharani", the results are revealed to be special.

If it is Rohini nakshatra, the results are set to be more fruitful. Any charitable act on this day is supposed to bring benefits and blessings equal to the performing of Yajnas.

The way of celebrating Kartik Purnima is different among various states of India. There is something interesting and enjoyable about the rituals and customs of each of the states.

Chaturmas punishment ends on this day. Many fairs that begin on Prabodhini Ekadashi end on Kartik Purnima. Kartik Purnima is usually the most important day of the fair.

It is also believed that on this day Vishnu returns to his home after completing his stay in Bali. Hence, the day is called as Deva-Diwali.

In Pushkar of Rajasthan, the Pushkar Fair or Pushkar Mela starts on Prabodhini Ekadashi and continues till Kartik Purnima. This fair is held in honor of God Brahma, whose temple is situated at Pushkar.

A ritual bath on Kartik Purnima in Pushkar Lake is considered to be very sacred. It is assumed that circling the three Pushkars on Kartik Purnima is highly exemplary. Sadhus stay here from Ekadashi to full moon day in caves. Pushkar Fair is regarded as Asia's largest Camel fair.

A ritual bath at a pilgrimage center or Tirtha is advised on Kartik Purnima. The holy bath is called "Kartik Snana". A holy bath at Pushkar or The Ganga River, especially at Varanasi is considered as most fortunate.

The most popular day for bathing in the Ganges at Varanasi is Kartik Purnima. The devotees take bath in the evening during moonrise and offer worship by way of six prayers.

Any form of violence is prohibited on this day such as Shaving, haircutting, cutting of trees, plucking of fruits and flowers, cutting of crops.

The religious activities suggested for Kartik Purnima are especially donation of cows, feeding of Brahmins, fasting, etc. Presenting a gift of gold is said to fulfill all wishes of people.

To celebrate the killing of Tripurasura, images of Lord Shiva are carried in procession. Temples of Southern India are lit up throughout the light. Deepmalas or columns of lights are illuminated in temples.

People place 360 or 720 wicks in temples, to secure a getaway reaching hell after death. The 720 wicks signify the 360 days and nights of the Hindu calendar. In Varanasi, the ghats turn up alive with thousands of Diyas (brighten-lit earthen lamps).

People present lamps to priests. The lamps are lighted throughout the night in houses and Shiva temples. This day is also called "Kartik Diparatna", which means the jewel of lamps in Kartik.

The lights are also floated in miniature boats in rivers and lakes. The lights are placed under the Tulsi plant, sacred figs, and Amla trees. The lights in the water and under trees are accepted to help fishes, insects, and birds who saw the light to achieve salvation.

In Telugu households of Telangana, Andhra Pradesh, Karthika Maasalu is considered very felicitous. The Kartik month starts from the day of Deepawali.

From that day till the end of the month of Kartik, oil lamps with 365 wicks, prepared at home, are lit in Lord Shiva temples. Besides it, Kartik Puranam's text is read and fasting is observed till sunset, every day for the whole month. 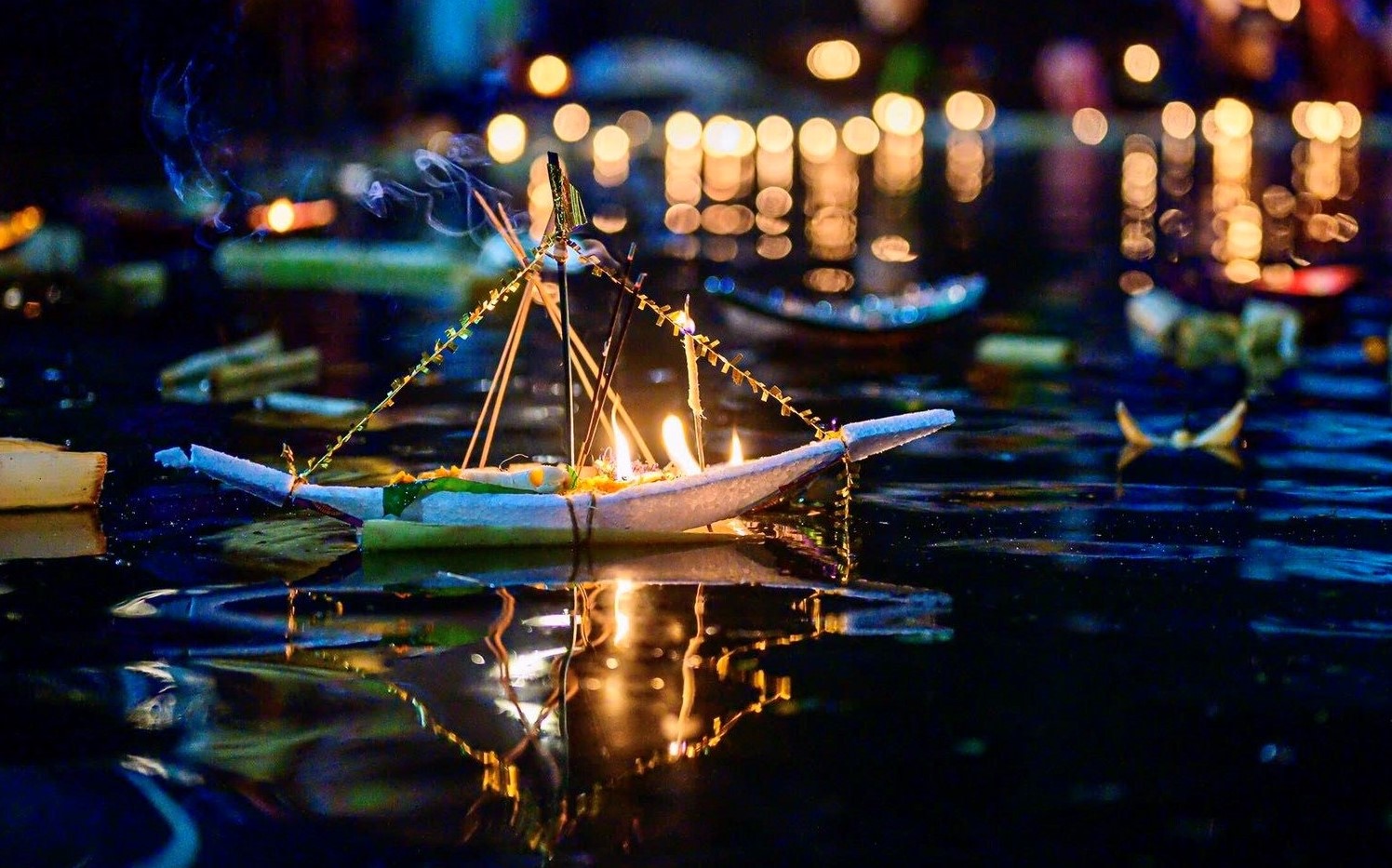 In Odisha, Kartik Purnima is observed in a very interesting way. On this auspicious day, early in the morning people celebrate Boita Bandana. Boita refers to boat or ship. Before sunrise, they bathe and head towards the nearest water body to float tiny boats.

These boats are made out of the banana stem, thermocouples, and coconut stick lit with Diyas, Fabric, Betel Leaves, Flowers, Duba Grass, Barakoli Patra, Raw Rice, and Clay Dolls.

The significance of floating boats in water bodies is to remind the past glory of Kalinga (the old Odisha). In the olden days, the Sadhabas (Sea traders) used to go to distant island nations to trade that share borders with the Bay of Bengal like Indonesia, Java, Sumatra, and Bali. Women in the family bid them goodbye on this day with a celebration on the banks of the river.

Children and elders are very fond of this ritual. The rhyming phrase that they keep singing while letting the boats float is "aa ka ma boi, pana gua thoi, pana gua tora, masaka dharama more". It is especially a prayer to keep the mariners safe during their journey with the blessing earned during Kartik month.

During the month of Kartik, Odias Hindus refrain from the intake of non-vegetarian food as it is the month of Dharma. The last five days of this month are very important and are known as 'Panchuka'. The very last day of Panchuka is celebrated as Kartik Purnima. 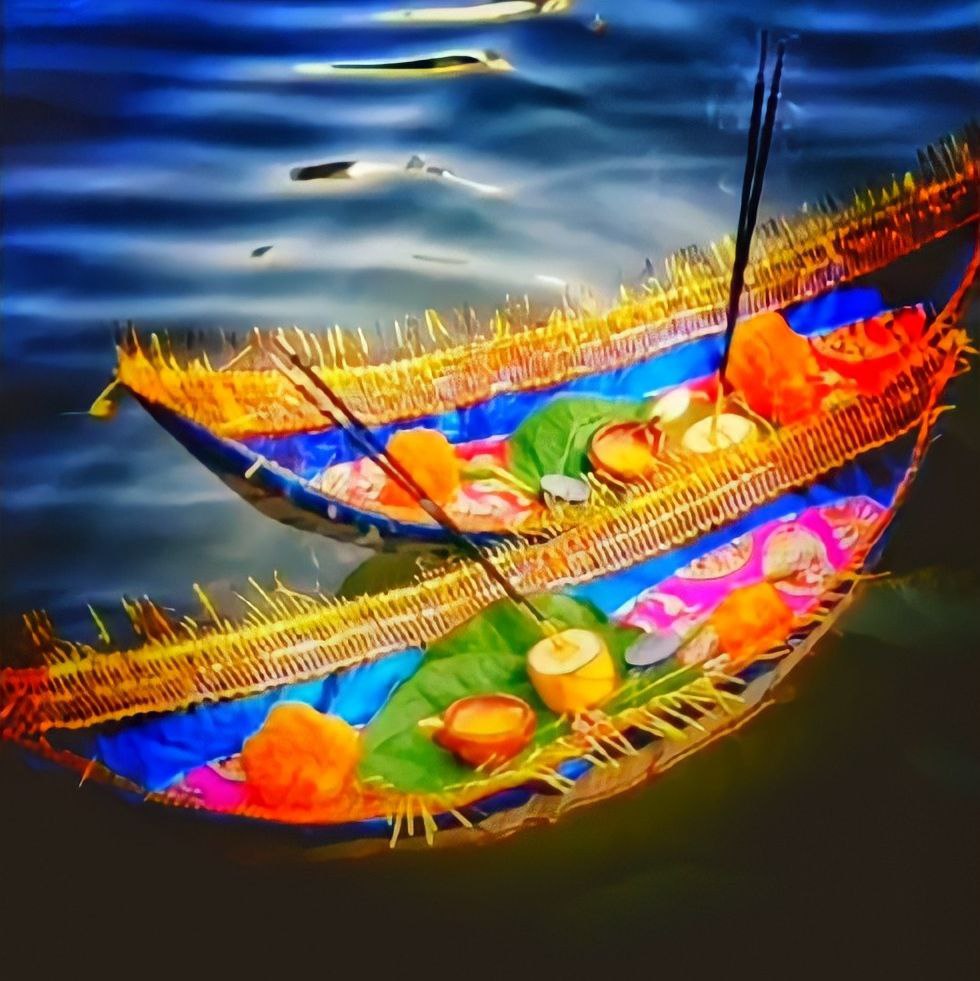 Kartik Deepam is celebrated in Tamil Nadu, where the Purnima is correlated to the Krittika Nakshatra. On this day, people light rows of lamps on their balconies. A ten-day annual festival is held to celebrate Kartik Deepam in Tiruvannamalai.

Kartik Purnima is an important religious day for Jains. They celebrate it by visiting Palitana a Jain pilgrimage center. Thousands of Jain pilgrims gather to the foothills of the Shatrunjay hills of Palitana taluka on the day of Kartik Purnima to take part in the auspicious yatra.

It is also known as the Shri Shantrunjay Teerth Yatra, this walk is an important religious event for Jain devotee who covers 216km of rough mountainous terrain on foot to Lord Adinath temple at the top of the hill.

It is regarded as a very auspicious day for Jains. As the temple at the top of the hill is closed to the public during the four months of Chaturmas, on the day of Kartik Purnima, the visit to the temple for the devotees is opened. So the first day attracts the maximum number of devotees as they were kept away from worshipping their Lord for four months of monsoon season.

The Jains believe that Adinath, the first Tirthankara, sanctified the hills by visiting it to deliver his first oration. According to the Jain script, millions of Sadhus and Sadhvis have achieved salvation on these hills.

Kartik Purnima is observed as "Gurupurab" or "Prakash Parva" of Shri Guru Nanak Dev Ji, the first guru of Sikhs. Bhai Gurudas Ji, The Sikh Theologist has started that Guru Nanak was born on this day. It is also called Guru Nanak Jayanti and worldwide is a public holiday in India.

India is known as the country of religious festivals. Every year people eagerly wait to celebrate Kartik Purnima. The celebration of the festival is to serve the purpose of bringing happiness to our lives and being more religious.