Diwali 2021 - Festival of Lights, Diwali or Deepavali is one of India's biggest festivals with history and belief of victory of good over evil. 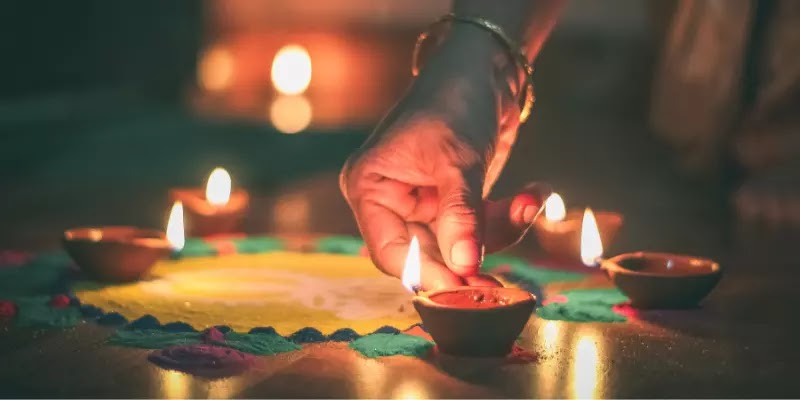 Diwali or Deepavali is one of India's biggest festivals with history and belief of victory of good over evil. The word 'Deepavali' means rows of lighted lamps so it is called the festival of lights and Hindus celebrate it with joy and people light up their houses, streets, and stores with Diyas, candles, and lamps. People gift sweets and other things, they visit friends and relatives on the day.

As it is celebrated on the new-moon (Amavasya) night, lights and fireworks have a significant role to play in this festival. This is why, when we heard the name Diwali, the first image that flashes through our minds is of impressive and crackling fireworks, sprinkling various sorts of bright and multi-colored lights in the night sky.

Although the custom of fireworks on Diwali is not very old, still they have succeeded in becoming such an essential part of Diwali. People celebrate Diwali for 5 days and worship Lord Ganesh for welfare and prosperity and Goddess Lakshmi for wealth and wisdom.

Diwali, being the festival of lights, is a sign of brightening and lighting up our knowledge and understanding the purpose behind the days of the festival, and use these thoughts in our daily lives. Diwali is celebrated for five days and each day has its importance.

The third day of Diwali is the actual Diwali. This is the day when Lord Ram returned to Ayodhya after 14 years of exile with his wife Sita and younger brother Laxman. On this day we worship Lord Ganesh and Goddess Lakshmi.

On the fourth day of Diwali, Goverdhan Pooja is performed. This day is remembered as Lord Krishna's miracle when he lifted the Goverdhan hill on his small finger to save his devotees from rain and thunder. The fifth day of Diwali is called Bhai Dooj. It is a day dedicated to brothers and sisters.

The history of Diwali is filled with legends and the central theme of all legends figures to the classic truth of the conquer of the good over the evil. Things that differ are the ways of presentation and the characters.

I. Ramayan: Lord Rama was exiled by his father Dashratha, the King of Ayodhya, along with his wife Sita and his younger brother Lakshman, on his wife Kaikeyi's insistence. Lord Rama returned to his Kingdom Ayodhya after 14 years of exile on this day, in which he put an end to the demon Ravana of Lanka, who was the evil. After this victory of Good over Evil, Rama returned to Ayodhya. In Ayodhya, the people welcomed them by lighting rows of candles and Diyas. So, it is an occasion in respect of Rama's victory over Ravana which is the victory of good over evil.

II. The Story of King Bali and Vamana Avatar: The other story concerns King Bali, who was a generous ruler and very desirous. Some of the Gods pleaded with Vishnu to check King Bali's power. Vishnu reincarnated on the earth in the form of a Vamana(dwarf) dressed as a priest.

The dwarf approached King Bali and asked him to give him the space that could cover with three strides. King Bali boastfully agreed thinking a dwarf surely couldn't cover much ground. At this point, the dwarf changed into Vishnu and his three strides covered the whole universe. King Bali was sent to the underworld. As part of the Diwali celebrations, some people also remember King Bali.

III. The Defeat of Narkasur by Lord Krishna: Shri Krishna demolished the demon Narkasura, who was was believed to be a demon of filth, covered in dirt. He used to kidnap beautiful, young women and force them to live with him. Eventually, their cries for rescue were heard by Vishnu, who came in the form of  Shri Krishna. For Hindus, this story is a reminder that good can still come out of evil.

IV. Krishna and The Goverdhan Mountain: The people of Gokul prayed to the God Indra. They believed that Indra sent the rains, which made their crops, grow. But Krishna came and prevailed on the people to worship the mountain Govardhan because the mountain and the land around it were fertile.

This made Indra furious and for taking revenge he sent thunder and heavy rain down on the village. The people cried to Krishna for help. Krishna saved the villagers by lifting the Govardhan with his little finger. The offering of food to God on this day of Diwali is prompted to Hindus of the importance of food and it is a time for being thankful to God for the mercy of nature.

From in Sikh perspective, Diwali is celebrated as the return of the sixth Guru, Guru Hargobind Ji from the confinement of the city, Gwalior. To remember his undying love for Sikhism, the townspeople lit the way to, Harmandhir Sahib or the Golden Temple, in his honor.

Among the Jains, on Diwali, they celebrate the Nirvana of Lord Mahavira who established the dharma as it's followed. Lord Mahavira was born as Vardhamana in the Nata clan at Khattiya-Kundapura, near Vaishali. He obtained Kevala Gyana at the Jambhraka village on the banks of the Rijukula river at the age of 42.

Significance of Diyas or Lerthen Lamps

It is customary practice in the Hindus according to which people light Diya in their homes every evening. This is not only a tradition but it signifies the surrender of one's soul to the almighty. The oil that is used to light the Diyas signifies all the negative human traits and that includes hatred, jealousy, greed, lust, anger, etc. The wick indicates our inner self or the soul.

The lighting of Diyas symbolizes that we need to clear our beautiful minds from the negative practices and thoughts by enlightening our inner self. With the vanishing oil of the earthen lamps, these negativities from the home get vanish.

It has a hidden message that illuminating occurs only when we walk on the path of righteousness as Lord Rama did. The Diya is the symbol that the flame of knowledge will remove ignorance.

The way of celebration in each part of the country is equally alluring. There is something interesting in the rituals and customs that each of the states follows during the Diwali celebration.

1. Maharashtra: It is believed that Lord Rama, during his 14 years of exile stayed in the Panchvati which is in the city of Nasik which falls in the state of Maharashtra. People belonging to this place that's why celebrate the festival with pomp and excitement. The Marathis perform Lakshmi Puja on the day of Diwali, they believe that Goddess Lakshmi visits every home on this day and brings a lot of prosperity and wealth. And, apart from Puja, delicious food like Anarse, Shev, Chakali, Shankar-pale is cooked with a variety of sweet dishes.

2. Uttar Pradesh: Ayodhya, which is the home of Lord Rama, the festival is celebrated with utmost zeal and fervor. In Varanasi, the entire atmosphere is lit up with lamps floating all around river Ganga when Ganga Aarti is done. As a sign when the priests start chanting people start lighting their houses and streets, beginning the festival of lights.

3. West Bengal: In West Bengal, especially in Kolkata, this festival is known by the name 'Kali Puja'.Goddess Kali is worshipped in West Bengal with heartily faith and sentiments. The worship and celebration continue till late at night. Everyone decorates their homes with colorful rangolis, clay lamps, powdered rice, and burst crackers.

4. Tamil Nadu: Unlike in almost all other states in India, where the bursting of crackers and the celebration takes place during the nighttime, in Tamil Nadu, people enjoy the same during day time. The Tamilians on Diwali take traditional oil baths and oil massage. This massage oil is made of betel leaves, fragrant pepper, and other items. After taking baths people wear new clothes, lit Diyas, perform Puja, and follow the same custom.

Apart from all these states, the festival is celebrated with similar zeal and excitement in other states of the country. India has been called the country of festivals and it is justified during such pompous festivals. If one wants to see the gaiety of celebration, Diwali is the perfect time to visit different parts of the state.