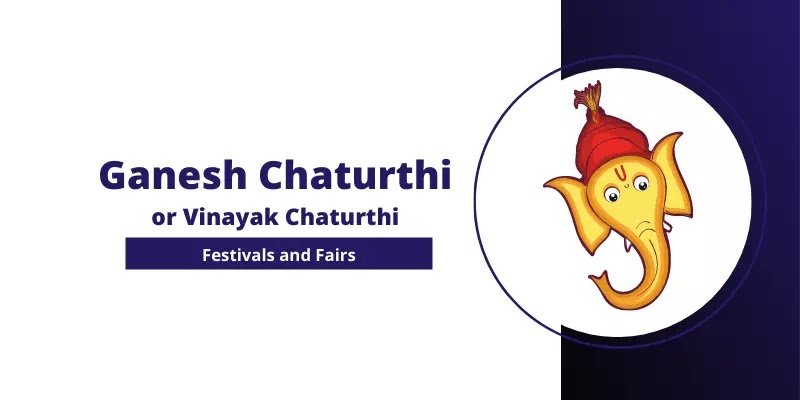 Festivals and fairs are an intrinsic part of Indian culture, the medium of our beliefs and feelings. Each community has its own festivals and holidays but this doesn't prevent other religious groups from enjoying the days of these festivals. Among those festivals, Ganesh Chaturthi is the biggest festival in the Hindu community, and this festival is grandly celebrated.

Ganesh Chaturthi or otherwise called Vinayak Chaturthi is a Hindu festival celebrating the arrival of Ganesh to earth from Kailash Parvat with his mother Goddess Parvati or Gauri. It is celebrated to commemorate the birth anniversary of the elephant-headed deity Lord Ganesha, the god of prosperity and wisdom. It falls on the fourth (Chaturthi) day of the month of Bhadrapada (August - September).

Ganesh puja is one of the widely celebrated Hindu festivals in the country and outside the country. The blessings of this God are invoked at religious ceremonies since he is the one who can turn all difficulties into success. Lord Vinayaka is known as the fortune giver and also the patron god of traveling. Ganesh is depicted with an elephant's head on a human body.

The festival is considerable with the installation of Ganesh clay idols privately in homes and publicly by Shri Bal Gangadhar Tilak popularly known as Lokmanya Tilak in Pune in the year 1893 on elaborate pandals.

The festival was first celebrated publicly in Pune in 1892 by Bhausaheb Laxman Javale. In 1893, the Indian freedom fighter Lokmanya Tilak praised the celebration of Ganesh puja in his newspaper and dedicated his efforts to launch the annual domestic festival into a large well-arranged public event.

He recognized Ganesh's appeal as the god for everybody. According to Robert Brown, he chooses Ganesh as the god that bridged the gap between Brahmins and Non-Brahmins. Tilak was the first to install large public images of Ganesh in pavilions in the Bombay Presidency and other celebratory events at the festival.

Public preparations for the festival begin from the months in advance. Local Mandapa or pandal's usually capitalized either from donations by local residents or community organizations.

The making of the Murti in Maharashtra usually begins with worshipping the feet of Lord Ganesha. The Murti is brought to pandal on the day or a day before the festival begins. The pandals have extravagant decoration and lighting.

At home, the festival preparation includes purchasing Ganesh idol, puja items, fruits, decorative items, etc. The murti is brought home either a day before or on the day of the Ganesh puja itself.

On the day of the puja, the ritualistic installation of the day Murti is done along with chant of holy mantras during a definite auspicious period of the day.

In the consecration ceremony, a priest performs a Prana Pratistha, a ritual to invoke life in the idols, followed by Shhodashopachara, or the 16 ways of paying tribute. Amid the chanting of Vedic hymns from religious texts like Ganapati Atharvashirsa, Rigveda, and the Ganesh Srota from Narada Purana.

On the last day of the festival, the tradition of Ganesh Visarjan takes place. The finishing day of the 10-day festival is popularly known as Anant Chaturdashi. The Visarjan or immersion of the idol takes place in a river or sea. On the last day, the devotees come out in processions carrying the Murti of their beloved God and perform immersion.

There is an interesting story behind the legend of Ganesh Visarjan. It is believed that on the last day of the festival Lord Ganesha returns to the Kailash Parvat to join his parents Lord Shiva and Goddess Parvati.

The celebration of Ganesh Chaturthi also indicates the significance of the cycle of birth, life, and death of Lord Ganesha, who is known as Lord of New Beginnings.

It is believed that when the Murti is taken out for immersion, it also takes away with it various difficulties of the house, and these difficulties are destroyed along with Visarjan. Every year people eagerly wait with great anticipation to celebrate the festival Ganesh Chaturthi.