Dussehra or Vijayadashami is a major Hindu festival celebrated at the end of Navaratri every year. It is also known as Durga puja or Dasara. 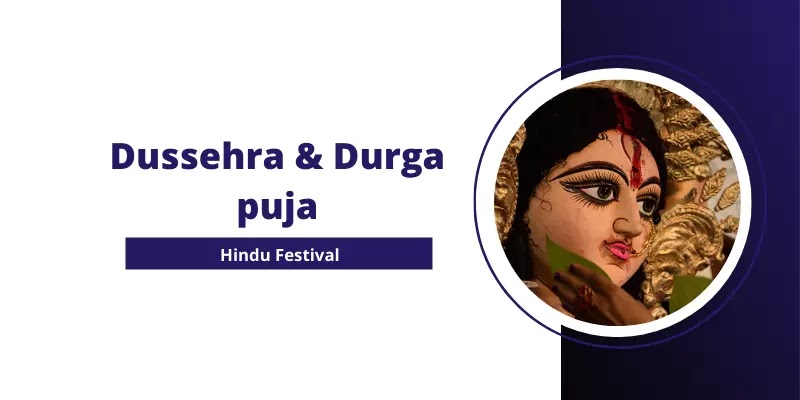 Dussehra or Vijayadashami is a major Hindu festival celebrated at the end of Navaratri every year. It is also known as Durga Puja or Dasara. The Festival's name is derived from the Sanskrit word "Dasha" which means ten and "Hara" which means defeat symbolizing the victory of good over evil.

Durga puja is celebrated on the tenth day of the month of Ashvina(sept-oct) with the appearance of the full moon, an event called the "bright fortnight" (Shukla Paksha). The festival corresponds with the culmination of the nine Day Navratri festival and with the tenth day of the Durga puja. It marks the beginning of the preparation for Diwali, which occurs 20 days after Dussehra.

Dussehra is celebrated with great passion and fanfare. It is observed for different purposes and celebrated differently in various parts of India. In the southern, eastern, northeastern, and some northern states of India, Dussehra marks the end of Durga Puja, remembering goddess Durga's victory over the buffalo demon "Mahishasura" to bring back and protect dharma.

In the northern, central, and western states, the festival is called Dussehra ( Dashahara ). In these regions, it signifies the end of Ramlila and remembers Lord Ram's victory over the ten-headed demon "The Ravana".

On the very same occasion, Arjuna alone defeated all Kuru warriors including Bhisma, Drona, Karna, Ashwatthama, a remarkable example of the victory of good over evil (Dharma over Adharma). It also symbolizes an admiration for one of the aspects of Goddess Devi, such as Durga or Saraswati.

In Hindu mythology, the demon Mahishasura had created terror in the Devaloka( the world where god lives ) but Maa Durga killed the Rakshas (demon). The first nine-day of Dussehra symbolize the battle which took place between the different demonstrations of Durga and Mahishasura. The tenth day is the day when Maa Durga finally defeated him.

It is known as Pratipada or the first day, this day is related to Shailaputri (Daughter of the mountain) an incarnation of Parvati. It is in the form that Maa Durga is worshipped as the wife of Lord Shiva. She is depicted as riding the bull Nandi with a Trishula in her right hand and a lotus in her left. Shailaputri is thought to be the direct incarnation of Mahakali. She is also considered to be a reincarnation of Sati, therefore called Hemavati. The color of this day is grey, which depicts action and strength.

Another incarnation of Parvati is called Goddess Brahmacharini who is worshipped on the second day(Dwitiya). In this form, Parvati became Yogini, her unmarried self Brahmacharini is worshipped for Moksha and establishment of peace and prosperity. It illustrates as walking bare feet and holding a Japamala(rosary) and a Kamandala(pot) in her hands. She symbolizes bliss and calm. Blue or Orange is the color code of the day.

The third day or Tritiya is celebrated as to worship goddess Chandraghanta. The name is obtained from the fact that after marrying Lord Shiva, Parvati adorned her forehead with Ardha Chandra. She is the incarnation of beauty and is also symbolic of bravery. White is the color of the third day, which is a high-spirited and joyful color.

On the fourth day of Chaturthi, the goddess Kushmanda is worshipped. Goddess Kushmnada is associated with the ability of vegetation on Earth and hence the color of the day is Red. This goddess is believed to be the creative power of the universe. She is portrayed as having eight arms and sits on a Tiger.

The goddess worshipped on Panchami or the fifth day is Skandamata. She is the mother of Skanda and Kartikeya. She is illustrated as riding a ferocious lion, having four arms, and holding her baby. The color of the day is Royal Blue which is symbolic of transforming the strength of a mother when her child is confronted with danger.

She is an incarnation of Durga and is shown to exhibit courage. The color of the day is Yellow which is symbolized a warrior goddess. She is considered one of the most violent forms of Devi. In this avatar, Katyayani rides a lion and has four hands. She is a form of Goddess Parvati, Mahalaxmi, and Mahasaraswati. She is celebrated on the sixth day i.e Shashthi.

On the seventh day or Saptami, the most ferocious form of Goddess Durga is worshipped. It is suspected that Parvati removed her fair skin to kill the demon Sumbha and Nisumbha. The color of this day is Red. The goddess appears in red-colored attire or tiger skin with a lot of anger in her fiery eyes, her skin turns black. The Red color depicts prayer and ensures the devotees that the goddess will protect them from harm. She is celebrated on the seventh day or Saptami.

Goddess Mahagauri symbolizes intelligence and peace. The color of this day is Peacock Green which depicts optimism. She is worshipped on Ashtami or the eighth day. It is believed that when Kaal Ratri took a bath in the Ganga river, she became extremely fair from her darker complexion.

On the Navami or ninth day of the festival, people pray to Siddhidatri. She is picturized sitting on a lotus and has four hands. She is believed to possess and grant all types of Siddhis. She is also known as Mahalaxmi. The purple color of the day portrays an appreciation of natural beauty.

It is popularly celebrated in the Indian states of West Bengal, Assam, Odisha, Tripura, the country of Bangladesh, the diaspora from these regions, and in the Mithilanchal regions of Bihar and Nepal.

The primary goddess worshipped during Durga Puja is Durga but the celebration also includes other major deities such as Lakshmi (goddess of wealth and prosperity), Saraswati (goddess of knowledge and music), Ganesha (god of beginnings), and Kartikeya (god of war).

In Odia traditions, these deities are considered to be Maa Durga's children. Dussehra is believed to celebrate Maa Durga's visit to her natal home with her beloved children.

Primary celebrations begin on the Shashi or sixth day on which the goddess is welcomed with rituals. The festival begins with Mahalaya a day on which Hindus offer water and food to their dead ancestors. The festival ends on the tenth day or Dashami. During the four days of the festival, the streets of the city are elaborately decorated and turn wonderland throughout the state.

People welcome the arrival of Maa by rejoicing themselves, eating tasty dishes, wearing new clothes, visiting different pandals across the city, The significance of the sixth day(Shashti) of the festival is devotees welcome the goddess and festive celebrations are inaugurated. On the Saptami, Ashtami, and Navami, the goddess along with Lakshmi, Saraswati, Ganesh, and Kartikeya are worshipped and these days mark the main days of puja, recitation of legends of Durga in Durga Mahatmya, social visits to elaborately decorated and illuminated pandals. and family gatherings.

The puja rituals involve mantras, shlokas, chants, arati, and offerings. The shlokas and mantras praise the divinity of the goddess. According to the shlokas, Maa  Durga is worldwide the incarnation of power, nourishment, memory, faith, wealth, forgiveness, emotion, desire, beauty, satisfaction, fulfillment, and peace.

In Odisha, Cuttack is famous for its "Chandi Medha" in Dussehra. The state capital is famous for the modern themes and creativity in the pandals. In the northern parts of the state, particularly in Balasore, Dussehra is celebrated with much fervor.

The festival ends on the tenth day (Vijayadashami) when devotees start on a procession carrying the worshipped clay sculpture idols to a river and immerse them, symbolic of her return to her marital home with Shiva in Kailash. People eagerly wait every year for this festival as it gives immense pleasure and feels joy to all of us when Maa arrives. It is symbolic of the success of good over evil, not just in the world but also in the heart and minds of human beings.