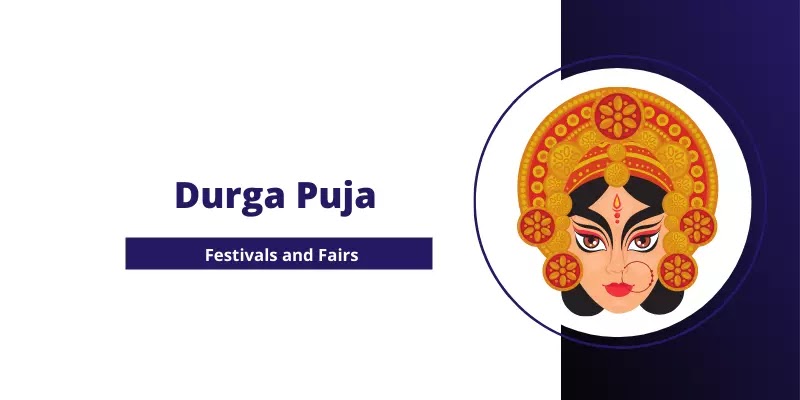 Festivals and fairs are an intrinsic part of Indian culture, the medium of our beliefs and feelings. Each community has its own festivals and holidays but this doesn't prevent other religious groups from enjoying the days of these festivals. Among those festivals, Durga Puja is the biggest festival in the Hindu community, and this festival is grandly celebrated.

Durga puja is celebrated on the tenth day of the month of Ashvina(sept-oct) with the appearance of the full moon, an event called the "bright fortnight" (Shukla Paksha). The festival corresponds with the culmination of the nine Day Navratri festival and with the tenth day of the Durga puja. It marks the beginning of the preparation for Diwali, which occurs 20 days after Dussehra.

In Bengal and Odisha, Maa Durga is worshipped for five days and festivities begin from 'Shashti' (6th day) onwards and culminates in the famous 'DurgoPujo' on the tenth day. The unique ritual attached to the Bengali Durga Puja is that on the last day of the Pujo, the massive idol of the Durga made of clay is immersed in the sea or the river.

This immersion of the idol signifies the return of Goddess Durga to the home of Lord Shiva who is her husband after her ten-day stay at her parental home. In other parts of India like Mysore, it is called 'Dasara' and in Gujarat, people refer to the festival as 'Navratri' and celebrate it with dances like Garba and Dandia.

It is popularly celebrated in the Indian states of West Bengal, Assam, Odisha, Tripura, the country of Bangladesh, the diaspora from these regions, and in the Mithilanchal regions of Bihar and Nepal.

The primary goddess worshipped during Durga Puja is Durga but the celebration also includes other major deities such as Lakshmi (goddess of wealth and prosperity), Saraswati (goddess of knowledge and music), Ganesha (god of beginnings), and Kartikeya (god of war).

In Odia traditions, these deities are considered to be Maa Durga's children. Dussehra is believed to celebrate Maa Durga's visit to her natal home with her beloved children.

Primary celebrations begin on the Shashi or sixth day on which the goddess is welcomed with rituals. The festival begins with Mahalaya a day on which Hindus offer water and food to their dead ancestors. The festival ends on the tenth day or Dashami. During the four days of the festival, the streets of the city are elaborately decorated and turn wonderland throughout the state.

People welcome the arrival of Maa by rejoicing themselves, eating tasty dishes, wearing new clothes, visiting different pandals across the city, The significance of the sixth day(Shashti) of the festival is devotees welcome the goddess and festive celebrations are inaugurated. On the Saptami, Ashtami, and Navami, the goddess along with Lakshmi, Saraswati, Ganesh, and Kartikeya are worshipped and these days mark the main days of puja, recitation of legends of Durga in Durga Mahatmya, social visits to elaborately decorated and illuminated pandals. and family gatherings.

The puja rituals involve mantras, shlokas, chants, arati, and offerings. The shlokas and mantras praise the divinity of the goddess. According to the shlokas, Maa  Durga is worldwide the incarnation of power, nourishment, memory, faith, wealth, forgiveness, emotion, desire, beauty, satisfaction, fulfillment, and peace.

In Odisha, Cuttack is famous for its "Chandi Medha" in Dussehra. The state capital is famous for the modern themes and creativity in the pandals. In the northern parts of the state, particularly in Balasore, Dussehra is celebrated with much fervor.

The festival ends on the tenth day (Vijayadashami) when devotees start on a procession carrying the worshipped clay sculpture idols to a river and immerse them, symbolic of her return to her marital home with Shiva in Kailash. People eagerly wait every year for this festival as it gives immense pleasure and feels joy to all of us when Maa arrives. It is symbolic of the success of good over evil, not just in the world but also in the heart and minds of human beings.