Krishna Janmashtami, the Hindu festival is the birth anniversary of Lord Krishna. It is also known as Gokul Ashtami. Lord Krishna was born at midnight 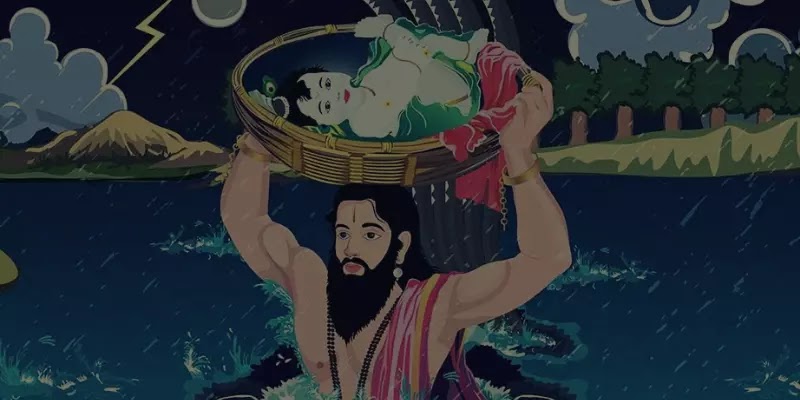 Krishna Janmashtami, the Hindu festival is the birth anniversary of Lord Krishna. It is also known as Gokulashtami. It is observed according to the Hindu Calendar, on the eighth day or Ashtami of the Krishna Paksha (dark fortnight) in Shraavana or Bhadrapada (Aug or Sept).

Krishna is Devaki and Vasudeva's son and his birthday is celebrated as Janmashtami. The devotees of Lord Krishna observe the events of his birth by preparing elaborate representations of Mathura, where he was born, the Yamuna River, over which he was safely transported to Gokul, the scene of his childhood, using small images of god.

He is the god of love, tenderness, and compassion. The most popular description of Lord Krishna is found in the Mahabharata as the charioteer of Arjuna during the "Dharma Yudhha" at Kurukshetra.

He was beside Arjuna on the side of "dharma". Krishna was born to end the tyrannical rule of Kansa, his uncle who feared the prophecy that the eighth child of Devaki will kill him.

The Janmashtami celebration and customs begin early in the day and devotees decorating Krishna idols or images with flowers and "Mor Pankh". They offer the god his favorite "Makhan", curd, milk, fruits, sweets, etc.

Temples and household shrines are decorated with leaves and flowers. "Dahi Handi" event is very important in this festival. Pots of milk are hung from tall poles in streets and, men and children form human pyramids to reach and break the pots– it is the imitation of Krishna's childhood play with cowherd boys when they stole the curds from every house.

In Dwarka, which is one of the major Dhams or religious places for the Hindus dedicated to Lord Krishna, this day is celebrated with lots of programs. Similar celebrations are seen in Mathura and Vrindavan which are associated with the birthplace of Lord Krishna.

In Maharashtra, the festival is called Dahi-handi and is celebrated in an extravagant manner. A Matki is hung several feet in the air. Young men gather and make a human ladder and try to break the Matki, it is the representation of Lord Krishna breaking a Matki to get butter.

Krishna Janmashtami is followed by the festival Nandotsav which celebrates the occasion when Nanda Baba distributed gifts among the community in honor of the birth. It is a festival of group singing and dancing.

The festival is marked by the performance of "Ras Leela" or the playful acts of Radhakrishna. Several Krishna Leela's are also performed, which depict the childhood and adolescence escapades of Lord Krishna.