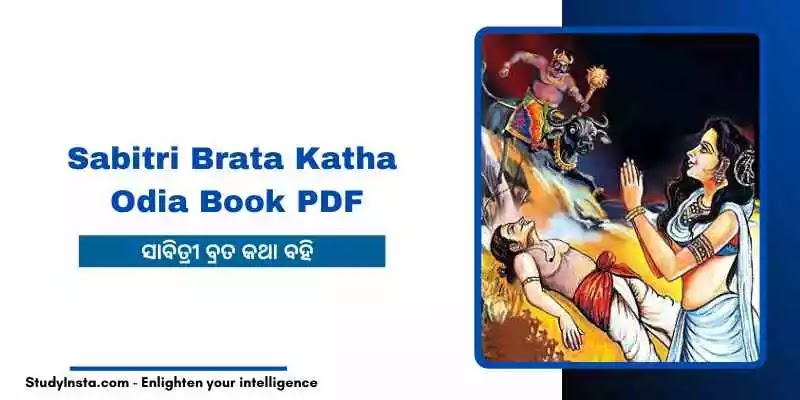 Sabiti Brata - Festival, Melas, Bratas, Oshas, and Pujas, are an intrinsic part of Indian culture, the medium of our beliefs and feelings. Each community has its own Festivals, Mela, Osha, Bratas, and Holidays but this does not prevent other religious groups from enjoying these festive days. In this article, you can get to know the Sabitri Brata Katha and you can download the Sabitri Brata Katha Odia Book PDF here.

Odisha is remarkable for traditional Melas, Brata, Osha, and Pujas. Sabitri Brata and some Brata, Oshas, Melas, and Puja are derived from Ramayana, Mahabharata, Purana, and Grantha, etc.

Sabitri Brata is related to the well-being of their husband. It is celebrated in the Indian states of Odisha, Bihar, Uttar Pradesh, and also Nepal. The festival instituting to ensure the well-being, long life, and prosperity of the husband.

The story behind Sabitri Brata

The Sabitri Brata was named by lord Sabitri, the beautiful daughter of Madra Desa king Aswapati. Sabitri selected Satyaban as her life partner. Satyaban lives in the forest with his blind father Dyumatsen. Sabitri left her Palace and lived with her husband and the in-laws in the forest.

As her wife, she went to the forest to take care of them. One day Satyaban was cutting some woods in the forest, Satyaban’s head reeled and he fell down. Then the death of God Yamraj appeared to take away his soul. Sabitri pleaded to Yamraj not to separate from her husband, if he take away the soul she would also follow. Yamraj moved by the devotion of Sabitri and returned the life of her husband.

Yama is implored by Sabitri when he is about to leave his body and due to her determination and devotion to her husband, she wins him back to life and Satyaban regains his life.

Women wake up early in the morning on Sabitri Brata and take a bath, wear new clothes and ornaments. Women use red vermilion on the forehead. Bhoga to offering Sabitri consists of fruits like pineapple, dates, mango, jackfruit, banana, etc.

Women are going to the temple of lord Sabitri with flowers and fruits. Along with hula-hula and Haribola sounds.

Then start Puja with prayers  This fasting begins at sunrise and ends after sunset with prayers. The fast broken by consuming the Bhoga of Sabitri.

Women always remember the determination of Sabitri, she believes that when she observed this Brata her husband lives a long life with good health and wealth.

Note: This content was uploaded by our users and we believe in good faith that they are allowed to share this PDF. If this content is uploaded incorrectly on our website without permission, and if you want to remove your copyright content from our website, Complain by pressing the DMCA Form button below!