Khudurukuni Osha celebrates by young and unmarried girls, waking up early before sunrise and collect various types of flowers such as Mandara, Tagar, 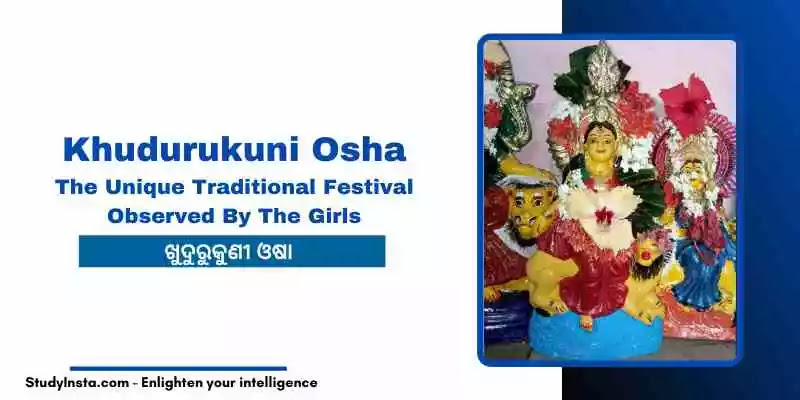 Khudurukuni Osha, In Odisha the Hindu month Bhadrab (Aug-Sept) there was held a unique traditional festival observed by the girls who are unmarried and conducted this Puja for welfare, safety, and prosperity of their brothers.

In Odisha the Hindu month Bhadrab (Aug-Sept) there was held a unique traditional festival observed by the girls who are unmarried and conducted this Puja for welfare, safety, and prosperity of their brothers.

Khudurukuni Osha celebrates by young and unmarried girls, waking up early before sunrise and collect various types of flowers such as Mandara, Tagar, Kusuma, Champa, Kaniari, Padma, etc. After taking a bath pray to the God sun by making small mounts (Bhaluka) with the help of sand and clay. Which is situated on the banks of rivers or ponds and decorating with vermilion, Turmeric powder, all types of flowers, also vegetable flowers (cucumber flower, etc) milk .agur, and some Bhoga.

The place where the Bhaluka is found is cleaned with cow dung. All girls first observed Bhaluka Puja then go to their houses. The floor is cleaned and Jhoti or Chita are drawn. The goddess worship and rituals begin in the evening.

Prime offerings to the goddess are coconut, apple, grapes, and all types of fruits, Chuda, Mudhi, Ukhuda, Khuda Bhaja, Manda Pitha, Chakuli Pitha, Chana Pitha, Chena, etc. The word Khudurukuni which is derived from the word Khuda-Rankuni means who is very eager for Khuda Bhaja. The younger girl Tapoi survived on Khuda Bhaja.

Girls' songs life of Tapoi during puja. The first episode is the story of Maa Mangala. Another episode is the story of Tapoi, who was faced all torture, pain by her sister-in-law when her all brothers away in the southeastern countries for trade. According to mythology when girls celebrate this Osha Goddess Khudurukuni can fulfill all their wishes and desires.

The story behind the Khudurukuni Osha

Khudurukuni Osha based of a young girl named Tapoi. She faced all the torture at the hands of her sister-in-law (except youngest sister-in-law).

Tapoi was the youngest sister to her seven brothers. They belong to a rich trading family. Only one daughter was loved by her parents and all brothers. Once she demands a golden moon. And her family ready to prepare a golden moon.

Tapoi while wandering one day she saw some young girls worshipping Maa Mangala. The young girl said to Tapoi that if she wants to save the return of her brothers, then she must pray and worship Maa Mangala. She was fast on those particular Sunday's.she offered Khuda to the goddess Mangala.

Prayers were answered and Tapoi's all brother returned. On knowing their sister's plight, all brothers decide to gives their wives a lesson. The brothers decked up Tapoi as goddess Mangala and informed their wives to visit the ship and welcome their husbands. Tapoi then cutting each of the wives' noses except the youngest one. Then 6 sister-in-law run away in a forest then a man helps to cure.

Tapoi is not a normal girl she was another role of Maa Mangala. After this, she went to heaven and we still worshipping maa Mangala.