Human evolution, the process by which human beings developed on Earth from now-extinct primates. The only extant members of the human tribe, Hominini 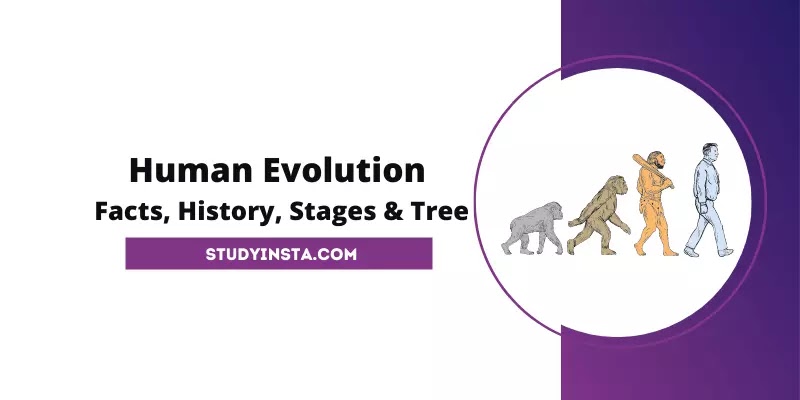 Human evolution is the evolutionary process that leads to the emergence of anatomically modern human beings, beginning with the evolution of primates on Earth. We, humans, are Homo Sapiens of genus Homo as a distinct species of the family Hominid, in which apes are included. Homo Sapiens are upright-walking species that live on the ground and were first evolved in Africa about 315,000 years ago.

Human evolution is not linear but a web as the process involved the gradual development of traits such as human bipedalism and language and also interbreeding of Hominins. There is abundant fossil evidence to indicate that humans were preceded for millions of years by other hominins such as Dryopithecus, Australopithecus, and other species of Homo. The great British naturalist Charles Darwin published his book "on the origin of species" in 1859 and "Descent of Man" in 1871. Some of them claimed that "Man was descended from the apes". 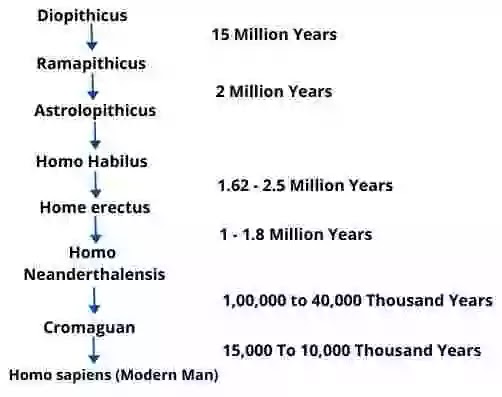 The evolutionary history of primates can be traced back 65 million years. It has been established that Dryopithecus is one of the oldest fossils which in turn evolved into apes and humans. They lived about 20-25 million years ago. After 14-15 million yrs back, the Ramapithecus fossil was excavated from Pliocene rocks. It walked on its hind feet. Australopithecus, the first ape-man appeared about 5 million years ago and existed until about 1.5 million years ago and give rise to Homo habilis.

Dryopithecus - The fossil of Dryopithecus was discovered from the middle Miocene and early Pliocene rocks of Africa and Europe. They lived about 20-25 million years ago. It had frontal broadened jaws, semi-erect posture, and large canines. It is one of the oldest fossils. They lived in trees i.e called arboreal animals and are appeared without brow ridges. Dryopithecus africanus is regarded as a common ancestor of man and great apes (orangutan, chimpanzee, gorilla). 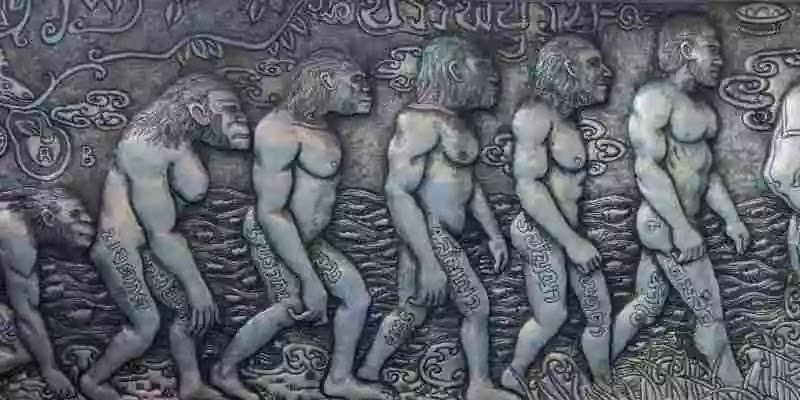 Ramapithecus - The fossil of this ancestor form was excavated by E. Lewis in 1930 from Pliocene rocks of Shivalik Hills of India and was found 14-15 million years ago. Perhaps it walked erect on its hind feet. They were ape-like and lived on the treetops but also walked on the ground. They had jaws and teeth like those of humans. Small canines are large molars suggest that Ramapithecus ate hard nuts and seeds like modern humans. Kenyapithecus wicker was discovered by L.S.B Leakey in 1955 from the Pliocene rocks of Kenya(Africa).

Apemen including a prehistoric man

Homo erectus (Apeman or Erect man) - They appeared about 1.7 million years ago in the middle Pleistocene. Homo erectus is evolved from Homo habilis. Homo erectus has a protruding jaw, large brow ridges, a flat face, a flattened skull, and a dome-like cranium to house a larger brain. They had a larger brain around 900cc. Probably they ate meat.

Homo erectus Erectus(Java ape-man) - In 1891, Eugene Dubois excavated a fossil from about 17 lakh years old Pleistocene rocks in central Java. Their body is 1.65 to 1.75 meters tall and weighs about 70 kg. Legs are long and erect but the body is slightly bent when moving. They had a broader nose and the forehead is low and receding, but brow ridges are high like those of apes. The skull cap is thick, heavy, and flattened in front. Cranial capacity is 800 to 1000 cc.

True men including the Man of today

Homo sapiens neanderthalensis(Neanderthal man) - Fossils of Neanderthal were first obtained from Neander Valley in Germany from the late Pleistocene by C. Fuhlrott in 1856. They walked upright as we humans do and had low brows, protruding faces, receding jaws, and high domed heads. Their cranial capacity was 1,300 to 1,600 cubic centimeters. They existed half a million years ago but were most numerous from about 100,000 years ago. Neanderthals became extinct 30,000 years ago.

Homo sapiens - Homo sapiens fossils known as Cro-Magnon Man, because its fossils were first discovered in 1868 from Cro-Magnon rocks of France by Mac Gregor. Cro-Magnon Man emerged about 34000 years ago. The most recent ancestor of today's man is regarded as Homo sapiens fossils. The Cro-Magnon man had about 1.8 meters tall and a well-built body like us. Its face was perfectly orthognathous with an arrow, elevated nose, broad and arched forehead, moderate brow ridges, strong jaws with dentition, and well-developed chin. Its cranial capacity was however more than ours, being about 1650 cc.

Homo sapiens sapiens (The man of today) - They are evolved after the evolution of Cro-Magnon Man. Homo sapiens appeared about 25000 years ago and started spreading all over the world about 10,000 years ago.