Essay on Honesty: Honesty means truthfulness. An honest man does not cheat anyone. He does not steal from anybody. Honesty also means uprightness. 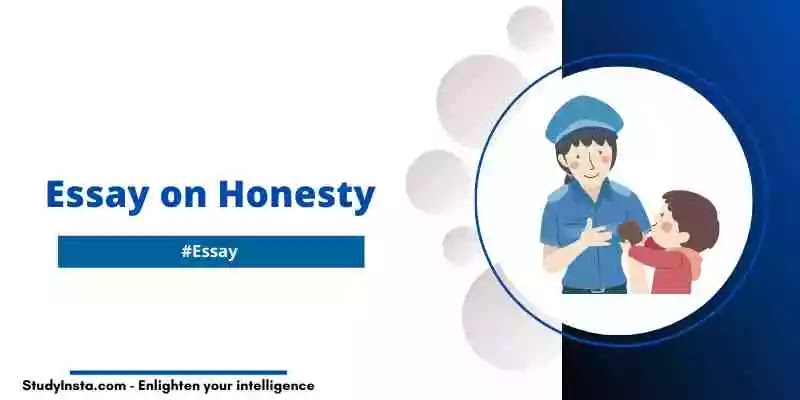 Essay on Honesty: Honesty means truthfulness. An honest man does not cheat anyone. He does not steal from anybody. Honesty also means uprightness. It is a priceless virtue.

Honesty is its own advertisement. It ensures safety. Good name spreads far and wide. An honest lawyer's clients increase. An honest doctor's practice grows by leaps and bounds and an honest trader's customers go on increasing. Honesty and integrity are twin virtues. They are ornaments of an administrator. Also read: Essay on Good Manners.

Our country does not lack honest people. Mahatma Gandhi, Lal Bahadur Shastri, Gopabandhu Das and a host of others are living examples of honesty.

The proverb "Honesty is the best policy" holds good at all times. "Virtue is its own reward' has been proved by the poor wood - cutter's honesty and integrity. Since the woodcutter was honest in his statement and refused to accept the gold and the silver axes, the water goddess was pleased with him and rewarded him by giving him the gold and silver axes besides his own axe.

A dishonest man, on the other hand, is a social disgrace. Money earned by underhand means and sharp practices may, for a time, dazzle the eyes of the thoughtless people, but the unscrupulous rogues are ultimately exposed. A man who incurs debts in striving to maintain a style of living beyond his means is, in spirit, as dishonest as the man who picks our pockets or steals our valuables. The honorable man is frugal and pays his way honestly.

A dishonest man suffers agonies for his base and fraudulent acts. His dishonesty and deceit may end in his ruin and imprisonment. A dishonest man is hated and despised even by his own people.

While accusing others of dishonesty we should search our own hearts. Come what may, our motto in life should be to lead honest lives. We should not pass ourselves off as honest men without possessing that quality. An honest man is always armed with a strong weapon of truthfulness. It is rightly said:

"Princes and lords are but the breath of kings. An honest man is the noblest work of God."