Information about Odisha - Facts, Map, Famous Places, Govt, History of Odisha, Odisha is the state of India. It is the 9th largest state of India, 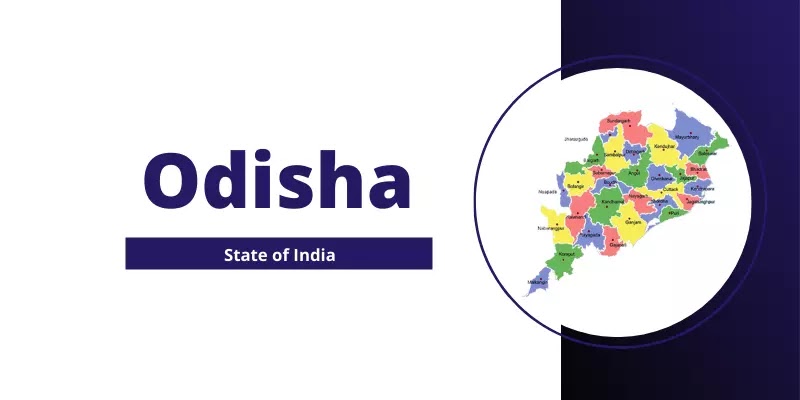 Odisha is one of the 30 states in India. It is the 9th largest state of India, is known for its tribal cultures and its many ancient Hindu Temples. The state has an area of 155,707 km2, Odisha is located in the northeastern part of India, facing the Bay of Bengal. Odisha is surrounded by West Bengal, Jharkhand, Chhattisgarh, and Andhra Pradesh.

The foundation day of Odisha is also known as “Utkal Divas”. It is celebrated every year on the 1st day of April. The capital city, Bhubaneswar is the largest city of Odisha and Bhubaneswar was the 1st smart city of India.

Area and Population of Odisha

The official language of the state is Odia. Other languages such as Hindi, Bengali, Santali, Telugu are spoken in the state. As per the 2011 census, the literacy rate is 72.9%.

It forms a part of the eastern seacoast of India. The shoreline of the state is comparatively undisturbed and the length of this shoreline is approximately 485km.  Physiographically the state is divided into the following areas:

The hilly and upland areas in the center. It is a part of the Indian peninsula with deep and broad valleys cut by the rivers. The region is so fertile, well-drained, and thickly populated. The shoreline flatland to the east.the undulating highland to the west. The flat terrains in the middle. The important flood basins.

The major rivers of Odisha are as follows: The major rivers of Odisha are Mahanadi( longest river of the state ), Kathajodi, Brahmani, Baitarani, Budhabalanga, Rushikulya, Vanmadhara, Nagavali, Kolab, Indravati, Tej rivers. Besides, there are several scenic lakes in the state that are top tourist draws such as Chilika lake, Pata lake, Anshupa lake, Indravati dam, Hirakud dam.

The economy of Odisha

The state has a strong economy with plenty of natural resources and an extensive shoreline. Odisha is rich in natural resources like coal, bauxite, iron ore, chromites. Steel manufacturing is a major industry in the state of Odisha. Other industries such as transportation, Oil refinery, power, information technology, aluminum are also major in the state.

The caves of Udayagiri: Khandagiri provide some of the earliest examples of Odissi dance. The dance form derives its name from the 'Odra nritta mentioned in Natya Shastra. In the mid-twentieth century, Odissi gained international acclaim due to the efforts of Charles Fabri and Indrani Rehman. Some of the facts of Odissi are:

The Jagannath temple of puri is a popular Hindu temple of Lord Jagannath, a form of Lord Vishnu. The temple was built by king Anatavarman Chodaganga in the twelve century. The Puri temple is famous for its annual Ratha yatra.

In this festival, three deities are placed on huge and elaborately decorated temple cars and pulled. Jagganath, Balabhadra, Subhadra are three deities worshipped at that temple including statues of Sudarshan Chakra, Madanmohan, etc.

Inside the temples contains statues of these three gods carved from a sacred neem tree known as Daru sitting on a jeweled platform, Ratnabedi. The deities are adorned with different clothes in different seasons.

The gate face east opening on the top of the Bada danda. The Baisi Pahacha or twenty-two steps leads to the temple complex. An idol of Jagannath known as Patitapavana is painted on the right side of the entrance.

The statue of goddess Lakshmi is carved at the top of the door. A pillar known as Aruna Stambha stands in front of the gate. Many devotees from different countries come here to get the blessing of Lord Jagannath.

Konark Sun temple is a thirteen century CE Sun Temple at Konark from puri. The temple was built by king Narasingha deva dedicated to the Hindu sun god Surya. This pilgrimage site for Hindus is located near Chandrabhaga.

The name Konark is derived from "Kona" and "Arka". Kona means corner refers to the Southwest location of this temple and Arka refers to the Hindu god Surya. Sun temple at Konark is also known as Black Pagoda as the first ray of the sun entered the Garbhagriha.

The Konark temple represents this iconography on a grand scale. It has 24 elaborately carved stone wheels which are nearly 12 feet in diameter and is pulled by a set of 7 horses. When viewed from land during sunrise and sunset the temple appears to emerge from the depth of the blue sea carrying the sun.

Bhubaneswar is an ancient city in India's eastern state of Odisha. The city historically was named Ekamra Kshetra. Although the modern city of Bhubaneswar was established in 1948, the history of the present-day city can be traced to the third century BCE. It is a confluence of Hindu, Buddhist, Jain heritage.

Bhubaneswar is often referred to as the temple city of India. The Kalinga architecture, with Puri and Konark, forms the "Swarna Tribhuja" or Golden triangle. It is one of the modern cities in India. Bhubaneswar and Cuttack are often called twin cities of Odisha.

Many temples built from sandstone are dotted around Bindu Sagar lake including the most famous Lingaraj Temple. Many sculptures, weaponry, remains of plants and animals and indigenous Patta Chitra paintings fill the Odisha State Museum. The city never forgets a second of time to attract people towards it.